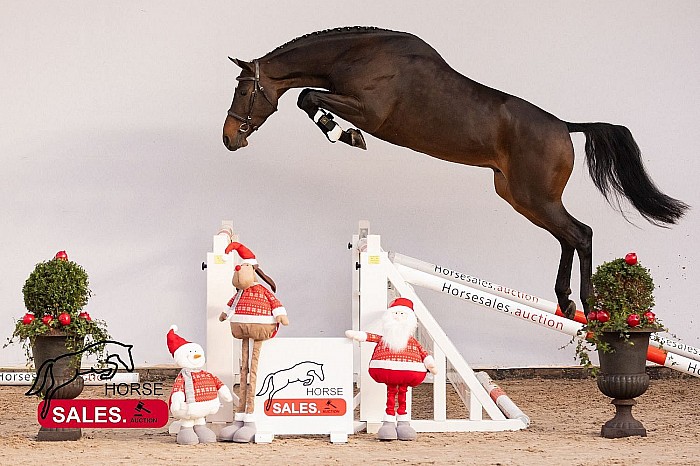 HIGHLIGHT OF € 38,000 IN SEASON FINALE HORSESALES.AUCTION.

During the young-stars edition, 39 young horses were eager to leave for a new owner. And with success. For €38,000, the fantastic jumping Grand-Slam offspring Nadal was knocked off as the highlight. He leaves for an international Dutch showjumping rider. The also Grand-Slam descendant of Westphalia approved Glorieus Road made the trip towards a Romanian sport stable for €30,000. Followed closely by Pink Floyd V&V. Who was captured by an Italian showjumping rider for €28,000.

That the collection was in taste was already apparent beforehand. Where it rained bids from the auction opening on Thursday. Established international names, trading stables and stallion owners found a new youngster. This resulted in an average well over €15,000. That banner-model Nadal managed to attract attention was in line with expectations. But after a tough bidding duel between a Polish rider, the young jumping talent stayed in the Netherlands after all. Where he will join the up-and-coming jumping stable of a young international rider.

Also in demand was the light-footed jumping Tangelo offspring Oxbow. Who saw the hammer fall at €20,000. There were also good prices for, among others, Impressive VDL offspring Obrigado. The reflex-jumping Bentley ARW. Babelou RV Z, brought in directly by the breeder, and Olina BH, who is related to Arko III. And the Eden Z, bred out of an international Grand Prix lineage. All of which sold near the €20,000 euro mark.

After eight successful auction editions, the HorseSales.Auction team looks back gratefully on the results achieved. And also looking ahead again to 2023. In which we again hope to be an important link between buyer and seller.

We wish all buyers of this season lots of fun and (sporting) success with their purchases. And wish everyone a healthy & blessed 2023.